"More Energy Fields, Current" is a definitive new peak in the recorded continuum of prolific producer/percussionist Carlos Niño. Featuring contributions from more than a dozen exciting voices in the creative music constellation of Los Angeles (of which Niño’s has been a central force for over 2 decades), including Sam Gendel, Nate Mercereau, Jamael Dean, and Jamire Williams, the album collects 10 pristine gems of collaborative communication helmed by the Southern Californian sage, elegantly presented in his unique “Spiritual, Improvisational, Space Collage” style.

The album is ripe with “ambient” passages that function like open portals between moments of consonance and clarity, and epic post-hip hop opuses like the heavy/heady “Thanking the Earth.” But even in the occasional absence of drums, there is a powerful pulse implicit in the program’s frequency of consciousness. It’s a testament to Niño’s foundations as a DJ. His distinct ability to craft a kinetic, cinematic sonic experience from dozens of independent, often rhythmically-ambiguous improvisational memories is more fluently displayed on More Energy Fields, Current than anything we’ve heard from him to date. It resonates, lucidly, with the way Niño’s mentor Iasos – who is known to the world as an original founder of New Age music – has described his work: "Real Time Interactive Imagination, Flow Texturization."

On More Energy Fields, Current, Niño immerses us in the watery depths of his world, spiriting us like a submarine through exotic nether-leagues of untouched sound. And when we arrive at the final, bookending piece “Please, Wake Up.” (an extended version of the opening theme, featuring saxophonist Shabaka Hutchings), it’s like a return, safely to shore.

It’s hard to keep track of the L.A. whirlwind, who released nine albums as Carlos Niño & Friends alone, but is also the driving force behind Build an Ark, AmmonContact, Hu Vibrational and numerous other collaborative projects. Niño is an unstoppable force, but somehow manages to bless each project with the same amount of positive energy and spiritual power, co-creating a universe all of his own.

‘More Energy Fields, Currently’ is certainly no exception. Described as a ‘spiritual, improvisational space collage’ is has some of the L.A. scene’s best players (including Sam Gendel, Nate Mercereau, Jamael Dean, and Jamire Williams) orbit around the maestro in ten meditative compositions that float somewhere between esoteric ambient and spiritual jazz and are both aquatic (‘Nightswimming’, ‘Ripples Reflection Loop’) and earthly (‘Thanking the Earth’, ‘Salon Winds’) in nature, but are all tied together by an unseen sacred force. ‘More Energy Fields, Current’ is yet another Niño beauty and the perfect addition to International Anthem’s ever expanding catalogue. (RO) 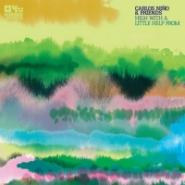