‘Now’ is the second album by Chicago visual and sound artist Damon Locks’ Black Momument Ensemble for International Anthem after 2019’s ‘Where Future Unfolds’ and it’s yet another milestone in the Chicago imprint’s increasingly impressive catalogue.

On ‘Now’ Locks uses samples, loops, spoken word and what sounds like tape experimentation to enhance the improvisational compositions created in the garden behind Chicago’s Experimental Sound Studio in the summer of 2020 with a band that includes fellow International Anthem recording artists Angel Bat Dawid and Ben LaMar Gay.

Recorded in only a few takes to capture the freshness and spontaneity of the original ideas ‘Now’ has a raw urgency directly reflecting the pandemic-induced fear and isolation and uncertainty and the social turmoil of these crazy times.

There’s plenty of joy and hope on ‘Now’ too, though, making this album a deep statement that basically encompasses all elements of life. The joy of getting together to make music again is obvious here as illustrated by the band’s reactions to the takes that were used that have purposely been left in.

But there’s more to ‘Now’ than Locks and his extended band jamming in a humid garden accompanied by an army of chirping cicades occasionally taking over the band alltogether. At times Locks’ urge to isolate elements from the sessions and loop them into infinity puts him in a different realm escaping everything that’s happening down here, but when It all comes together again it’s a beautiful thing. (RO) 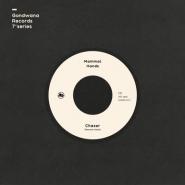